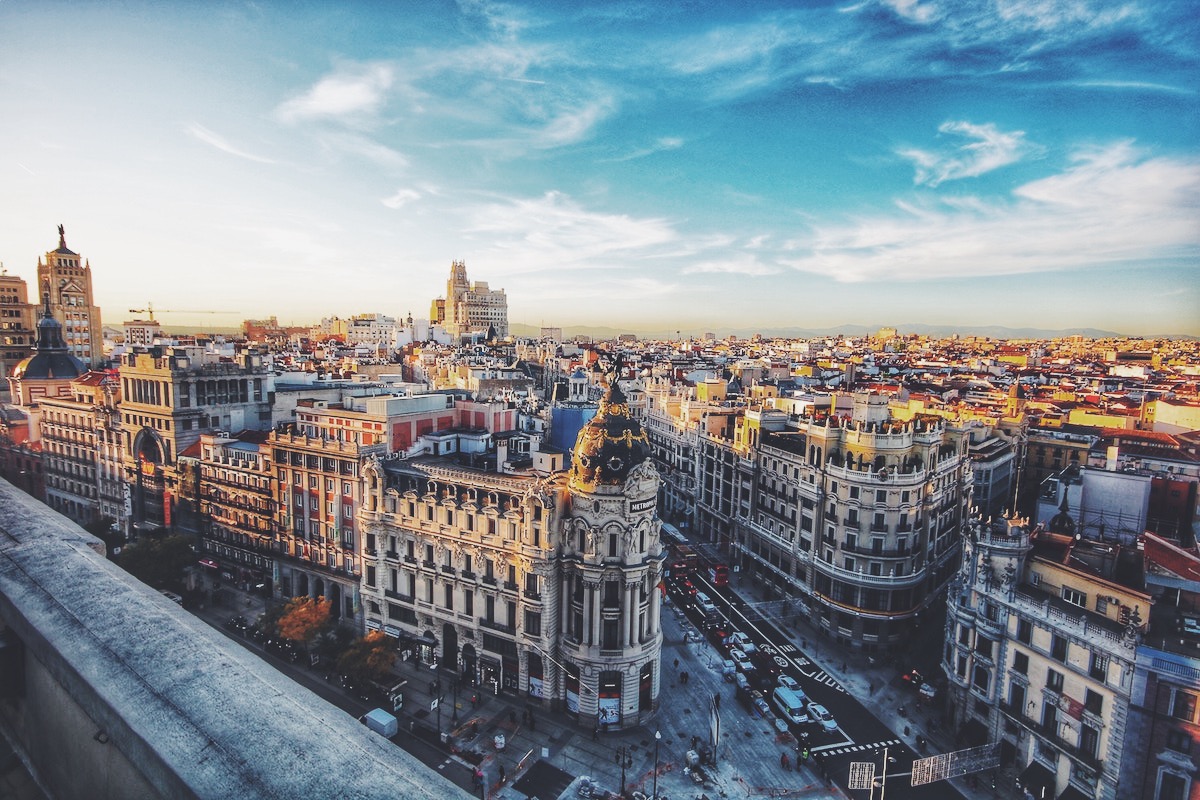 Private Tour of Portugal and Spain

The Private Tour of Portugal and Spain is a 7-day itinerary that will highlight the cultural differences and unique aspects of both Portugal and Spain through an in-depth exploration of their gastronomy, marvelous art and architecture, and fascinating history.
Visit the best museums and landmarks, delight yourself with the juicy flavors of typical Spanish tapas, let yourself be carried away by the emotional sound of a Fado show, get lost in the old neighborhoods, and enjoy unforgettable landscapes while enjoying a glass of the best Portuguese wine.
Get ready for an adventure, Portugal and Spain are waiting for you!

The Capital of Alto Alentejo (one of the Portuguese Regions) and classified by UNESCO as a World Heritage site since 1986.

The Convent of St. Francis in Évora, was the first house of the Franciscan Order in Portugal and was founded in the 12th century. The Church of the convent was remodeled at the end of the 15th century, between the years of 1480 and 1510, is an example of Gothic-Manueline architecture. It is related to the events that marked the period of the maritime expansion and is one of the most beautiful churches in Portugal.

Built in the 17th century by the initiative of three Franciscan friars in order to convey the message of the transience and fragility of human life. At the entrance, the warning: “We bones here laid, for yours we wait”. The walls and the eight pillars of the church are covered with about 5,000 human skulls and countless bones from the city’s cemeteries.

The Roman Temple of Évora was built in the early 1st century and is located in the historic city center, classified as a World Heritage Site by UNESCO, in 1986, is one of the most famous landmarks of the city and a symbol of the Roman presence in Portuguese territory.

Better known as Sé de Évora, it’s the largest medieval cathedral in Portugal. Its construction began in 1186 and consecrated in 1204, was completed later on, in 1250. It is a fascinating monument in granite that marks the transition from the Romanesque style to the Gothic style.

Get to know more about the wine production with a guided tour of a local winery. You’ll learn more about the daily life of a winery and at the end have a wine tasting with local ‘tapas’ such as cheese, sausage, olives, and bread.

Cork is plant material, 100% natural, from the bark of the cork oak. It can be extracted every 9 years and has several uses such as floor coverings, musical instruments, decoration, and clothing. Considered the most important industry in Portugal, with an area of ​​730 thousand hectares of cork oak, it is responsible for more than 50% of the world’s cork production.

It’s an Alentejo small village widely known for its handmade pottery. With about 35 pottery factories São Pedro do Corval is known as the Capital of Pottery (it’s the Portuguese largest pottery center).

Medieval village conquered by the Moors in the 12th century. It played, over the years, a very important role in monitoring the Guadiana River, after the border with Spain. The beauty and state of conservation of the village of Monsaraz are impressive, making it a museum village, unique in the region. From the top of the castle walls, built by D. Dinis in the 14th century and classified as a National Monument, we can see the whole village with houses painted white and slate roofs and the Alqueva dam.

A World Heritage Site by UNESCO. Elvas houses the World’s largest collection of bulwark fortifications and other military buildings as well as churches and monasteries of unique beauty.

Founded in 25bC, one of the best-preserved archaeological places in Spain. Mérida has several testimonies of the Roman occupation, like its theater and amphitheater dedicated to the Goddess Diana or the Roman bridge over the Guadiana River.

Where you will find an impressive City with imposing monuments such as palaces, towers, and churches.

Located in the valleys of the River Tagus and Guadiana, Trujillo holds an important collection of churches, castles, and stately homes that are built around its ‘Plaza Mayor’.

Monument of the Escorial

Built in the 16th Century, during the reign of the King Filipe the 2nd. The Escorial is a large and imposing complex that includes a palace, a monastery, a museum, and a library, located about 42km from Madrid.

A memorial in honor of those who lost their lives in the Spain civil war, built between 1940 and 1958. At this site, you can dazzle the majestic Basilica and also enjoy the impressive 150 feet tall Cross (its arms measure 46 meters and the cross has two bases).

The official residence of the Spanish royalty and Sabatini gardens surrounding the palace.

Currently, the seat of the Ministry of Territorial Policy has been the official residence for the Prime Ministers of Spain, since 1977.

The Plaza Mayor was built in the 17th century and is a central plaza in the city of Madrid. Designed in a rectangular shape, is surrounded by three-story residential buildings having 237 balconies facing the Plaza and has a total of nine entrance ways.

The former capital of Spain. Of a Huge monumental richness, Toledo is known as the City of 3 cultures due to their Christian, Jewish and Arab influences. Toledo preserves an artistic and cultural heritage in the form of churches, palaces, fortresses, mosques, and synagogues.

One of the main streets of Madrid. The Gran Vía, considered as the Broadway of Madrid, it’s an important commercial, tourist, and leisure area. In Gran Vía there is a pedestrian area that you can enjoy getting to know Madrid and their squares. On this walking street, you can get to know the ‘Plaza Mayor’ and the ‘Puertas del Sol’.

Which was transformed into a culinary space where you can taste delicious traditional Spanish dishes.

The birthplace of St. Teresa of Jesus, better known as Teresa of Ávila, who founded the Order of Discalced Carmelites. Ávila is surrounded by a 2.5 km long wall that has multiple ports and 88 round towers, arranged from 20 to 20 meters.

Town of the students. This is one of the richest Spanish cities in monuments of the Middle Ages, the Renaissance, and the Baroque and Classical eras, and its historic center is a World Heritage Site since 1988.

Has an important legacy of Romanesque and medieval art with an impact on its immense palaces, temples, and walls.

Overnight in: Miranda do Douro

You’ll start the day with a panoramic tour along the Douro Valley.

It’s the only Portuguese protected area that has been classified as a National Park and one of the most important natural attractions in Portugal. It’s known for its natural beauty, ecological & ethnographic value, and home to a variety of fauna and flora including deer, ‘garrano’ horses, wolves, birds of prey, pines, yew trees, chestnut trees, oaks, and a variety of medicinal plants.

Remains of the Roman Road that linked Braga to Astorga.

Visited by thousands of people every day, it’s one of the most important monuments in Braga. To visit the basilica you’ll have to take a lift that is considered to be the oldest one in Europe and one of its kind in the world, which is still water-powered.

Overnight in: Braga or Oporto

During this Oporto city tour, we will discover the history and charm of the city.

Cruise on the Douro River

Enjoy the fantastic landscapes on board of a typical local boat called ‘Rabelo’.

Port’s Wine is internationally acclaimed for its quality and although it is produced in the Douro Valley, the cellars are located in Oporto. Have a taste of this amazing and unique sweet Oporto’s wine.

The Cathedral of the city of Porto, located in the heart of the historical center is one of the main and oldest monuments of Portugal.

Portugal’s religious capital that attracts millions of pilgrims every year, due to its mystical power and atmosphere. It can hold about 300 thousand faithful at the same time and is twice the size of St. Peter’s Square in Vatican City.

Around 2KM from Fátima in a small village called ‘Aljustrel’, you can visit Marto’s family house and Lúcia’s house.

Explore one of the most beautiful region of Portugal: The Douro Valley, is classified as a World Heritage site by UNESCO. Here you will find several vineyards planted on the mountains slops and make a panoramic tour to see breathtaking landscapes, visit local wineries and taste the famous Douro wine.