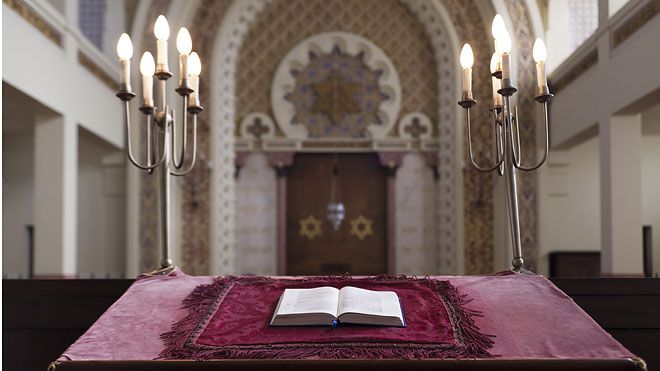 In the Private Crypto Jewish Lands Tour, you will learn about the history and ancient traditions of crypto Jewish communities in Portugal. After years of persecution that culminated in the Inquisition and the decree of Expulsion, most Jews were forcibly baptized, making them the first Iberian Crypto-Jews. Although the information is scarce, in this private tour you will visit small villages scattered high up in the mountains where these small communities have managed to survive, keeping their traditions and all the external signs of their faith secret for hundreds of years.
In the Private Crypto Jewish Lands Tour, you will visit not only places of great cultural importance, but also some of the most beautiful and charming villages in Portugal.
Come with us and explore in-depth the Portuguese culture!


Your tour guide will pick you up at the airport and take you on an introductory tour of the city. Start discovering Oporto with one of its most beautiful viewpoints!


Learn the history of one of the oldest and most charming cities in Portugal.

Oporto is the second-largest city in Portugal located along the Douro river and classified as a World Heritage site by UNESCO since 1996. During the day you will visit its historic center passing by the Jewish quarter and its most important monuments.

An 18th-century baroque church designed by the Italian architect Nicolau Nasoni and known to be the city’s symbol.

The Oporto railway station was built in the 20th century and it is the most beautiful one in the country. It has a glass and iron structure and it’s decorated with twenty thousand tiles that illustrate the evolution of the transportation and important events of Portuguese history and lifestyle.

The Cathedral Oporto city is located in the heart of the historical center and is one of the main and oldest monuments of Portugal.

Located in the heart of Oporto, is Portugal’s most famous bookstore. You’ll be surprised by its unique wooden staircase which gives it a ​​mysterious atmosphere. This bookstore became famous because of Harry Potter’s saga writer JK Rowling that used it as inspiration for the stairs of Hogwarts’ castle.

Gondomar is a small city located just outside Oporto, which has valuable built heritage and is known as the capital of goldsmithing in Portugal. Filigree is an artisan art that consists of twisting very fine gold or silver strands, which are then applied to frames of various shapes, filling them with delicate lace. The Gondomar Filigrana is still produced in family-run workshops, with techniques passed down from generation to generation. You will visit traditional workshops and learn about the production process of this ancient art.

The construction of the Kadoorie Mekor Haim Synagogue began in 1929 and was only inaugurated in 1938. Despite being victims of systematic persecution over the years the Jewish Community of Oporto has managed to build the synagogue, buy land for a cemetery and create conditions for its community to flourish again in Oporto. Today the community includes three hundred Jews from more than twenty countries.


Explore one of the most beautiful regions of Portugal. The Douro Valley is classified as a World Heritage site by UNESCO. Here you will find several vineyards planted on the mountain slopes. Enjoy breathtaking landscapes and visit local wineries where you can taste the famous Douro wine.

Lamego is a small village in the Douro valley region. Its connection with the Jewish community dates back to the 14th century, having at the time composed of four hundred Jews. Its historical center with its beautiful old buildings and outstanding viewpoints gives it a unique atmosphere that makes it one of the most visited villages in the region.

A small whitewashed town located in the Douro Valley region that is worldwide popular due to its astounding rock engravings collection which dates back to the Palaeolithic Era and today classified as a UNESCO World Heritage Site.

Trancoso is an ancient Jewish village. In the 14th century, the community had more than five hundred Jews which includes 25% of the population of the village. They worked as shoemakers, merchants, weavers, money lenders, and tailors. You will walk through the streets of the old town center and enjoy a breathtaking 360-degree view from the castle.

Almeida is considered one of the most important and beautiful fortified village in Portugal due to its location and its famous wall in a hexagonal shape.

Belmonte has the largest Jewish community in the Iberian Peninsula. A community that survived the Inquisition by practicing their religion in secret for more than six hundred years. In Belmonte you will visit: the Jewish Museum, the BET ELIAHU Synagogue, and walk around the Jewish Quarter.

The synagogue in Belmonte, Bet Eliahu was inaugurated on December 4th of 1996. It symbolizes the victory over religious intolerance and it is a symbol of strength and belief. For five hundred years, the Belmonte Jewish community lived hidden and practiced Judaism secretly. Today they have managed to rebuild the synagogue and more than a hundred Jews attend prayers every Friday night and Sabbath day.

With a unique natural beauty, the village is located about 700m above sea level, on the glacier valley of Serra da Estrela. In wintertime, the local shepherds wore cloaks or coats made from Burel, a tightly woven wool fabric to keep them dry and warm. For centuries these coats were made at home using crude methods. Today, many Portuguese fashion designers, are using it to create trendy coats, capes, bags, and hats. Visit the Burel shop and factory in Manteigas and find out more about wool production.

A small village with houses made of shale, a stone very common in the region which makes it unique in the country.

One of the historic centers of Portugal with the highest concentration of monuments. You will visit the churches of ‘São João Baptista’ and of ‘Santa Maria do Olival’ and the oldest Jewish synagogue in the country.

This exceptional architectural ensemble resulted from the fulfillment of a promise made by King João I in gratitude for the victory in Aljubarrota, a battle fought on August 14th of 1385, which secured the throne and guaranteed the independence of Portugal. Today, the Batalha Monastery is considered a UNESCO World Heritage Site.

A Jewish community lived in Óbidos between the 5th and 7th Centuries when the city was occupied by the Visigoth. In Óbidos its Jewish quarter dates back from the end of the 12th century.

The neighborhood of Alfama is a labyrinth of narrow streets and winding alleys. An old Jewish Quarter that today is considered one of the most traditional districts of Lisbon. It’s also the birthplace of Fado; a typical song of Lisbon classified as World’s Intangible Heritage by UNESCO.

The 13th century-old Saint Dominic’s church was the first Dominican church of Lisbon. For centuries it was considered the most important church in Lisbon where beautiful royal weddings and christenings, were held. But it was also the site of the Easter Slaughter, a three-day massacre, in 1506, during which 2.000 people accused of being Jews, were persecuted, tortured, and killed. After this episode, the church has been destroyed on several occasions by earthquakes and a brutal fire in 1959. Its impressive interior decorated in gilded woodcarvings and valuable paintings was destroyed. It reopened in 1994 and the marks of the fire were left exposed on the church walls giving it a unique and fascinating atmosphere. Today, there’s a monument and a mural in the square outside the church, inaugurated in 2008, that reads “Lisbon, the City of Tolerance” in 34 languages recalling the terrible episode of 1506 and paying a tribute to the Jewish victims.

Judaism in Portugal changed at the beginning of the 19th century, when the Sephardi Jews from Morocco and Gibraltar, mostly merchants, started to migrate to Lisbon. During the 19th century, the Jewish community of Lisbon had no formal synagogue and had to celebrate their religious rites in private houses. When the construction of the Lisbon’s Synagogue began its main facade had to face an inner courtyard because the Portuguese law at the time forbade non-Catholic temples from facing the street. Shaaré Tikvah Synagogue (Gates of Hope) was finally opened in 1904 and is still used today.


On your 3rd day, you have the option to visit Braga and Guimarães, both classified by UNESCO as World Heritage Sites. Along the day you’ll have the opportunity to see more of the region of Minho by visiting other iconic landmarks between the two cities.


On your 6th day you have the option to visit Fátima; Portugal’s religious capital that attracts millions of pilgrims every year, due to its mystical power and atmosphere. It can hold about 300 thousand faithful at the same time and is twice the size of St. Peter’s Square in Vatican City.


On your 7th day, you have the option to visit the charming village of Sintra, located in a Natural Park with castles and grand mansions used as summer houses for the Portuguese royalty. It’s a UNESCO World Heritage site and owing to its beauty is one of the most visited sites in Portugal.

Departure
Starting in Oporto and finishing in Lisbon 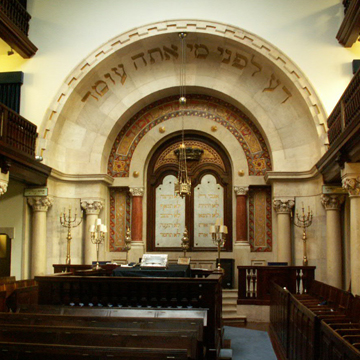 Discover Lisbon's history and its strong connection with the Jewish community. 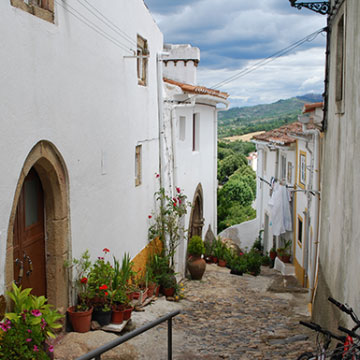 Learn about the Jewish heritage and Portuguese traditions and history. 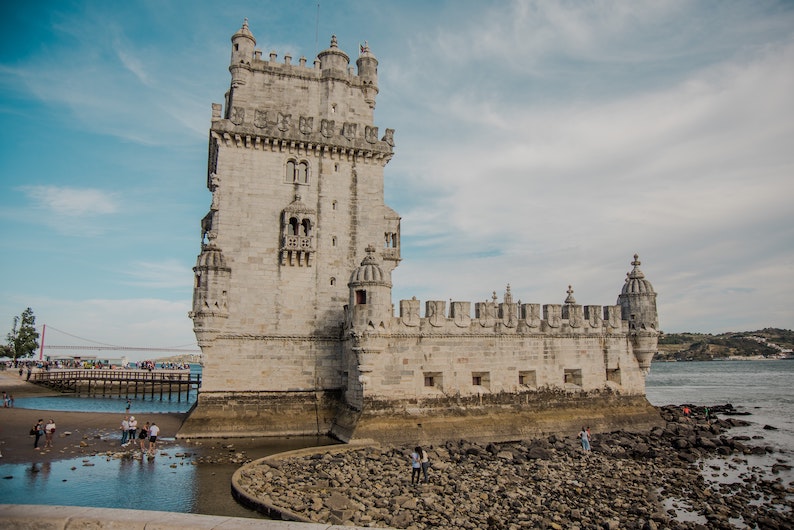